The following brief is a quick demonstration of the issue faced by cve-2019-14287.

This issue is presented when the user is allowed to run a specified command as any user other than the root user account, specified as !root in the /etc/sudoers file; the following screenshots demonstrate how this logic is bypassed.

As we can see here the version is below the patched version of 1.8.28.

The following screenshot shows a basic sudoers configuration in order to test this flaw: 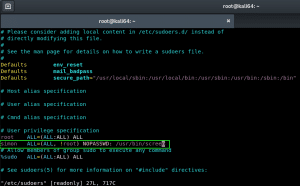 As we can see here my user can execute screen as any other user with the exception of root.

By adding a hash and minus 1 after the -u command in sudo we are able to exploit the flaw and execute the configured command as root:

At this point we now enter screen as a root user and can now execute root commands such as viewing the shadow file that was previously denied to us:

As seen this is a very dangerous flaw where configurations allow the !someuser prefix in the sudoers command.

The best thing to do at this point is run the following command: